Based in: office Paris (FR) and recording studio Girona (ES) 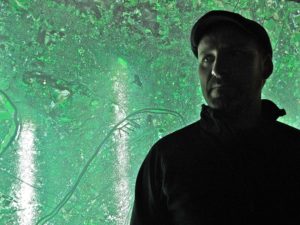 He drives crazy the customs officers. One day, he’s exploring Indian rhythms with tablas players from the fringes of Rajasthan. Next day, he’s hitting the road around Bucharest with gypsy musicians. He can vanish in Essaouira during a Gnawa lila’s night and reappear in Sevilla as part of a fiesta gitana.

Dj/producer on his own label No Fridge, where he has produced over 25 albums: with his band Click Here or the extravert Rona Hartner, for tsigane cultures traditions, as well as the Gnawa Njoum Experience from Essaouira and Hamadcha of Fez, for the North African mixes, defending the rights of the Indigenous peoples with Colelo Identidad Mapuche, pending his polar electro jazz beats with his collective UHT°, or digs into old tempos with the complicity of Masha Natanson from Poland or Agota Zdanavičiūtė from Lithuania.

His worldtronica has paved the way for a truly international league of cultural diversification.

“Dj Click uses the original source with delicacy and respect, sometimes discretely but always intelligently, to create an occidental electronic pulse. Click discovers the perfect balance between musical discovery and interpretations, between past and present. He is a world music rock star.” Time Out Tel Aviv

“The razor-sharp programming of one of France’s most adventurous Djs.” RFI

“If we could reach the madness with the music, it’ll be with the one of Dj Click” Hadra Trans Festival

“A multicultural weaving of a rare density ” The Art Chemists

“Dj Click is building the society of tomorrow” France Ô

“He surprises in his way of humanizing electro, behind the Click (s), there are flesh and beautiful stories” Lylo

“He is insatiable and tireless, Dj Click jumps from one universe to another with ease and elegance” RKK (Radio Nova)